The Jakarta Post reports that the Bali Police Chief, General Albertus Julius Benny Mokalu, has responded to complaints over mounting crime in Bali by pledging to heightened security, more patrols and the monitoring of recidivists living on Bali.

Said General Mokalu: “We have optimized all efforts to prevent crimes. We conduct routine operations; we have priority targets, by for example monitoring recidivists. Based on criminology, perpetrators tend to repeat crimes.”

In recent days, expatriates in Bali have organized themselves demanding a stronger police response to violent crime, largely perpetrated against women.

Various Facebook pages campaigning for a safer Bali have been launched together with peace and order vigils to demanding greater safety in the community.

In less than a single week Bali has been rocked by the death of an 18-year-old South Korean Woman in Denpasar who died during a purse snatching and the death of a U.K. Resident in her rented villa in Ubud.

The Bali Chief of Police insists his officers are working hard to solve crime but said community support is needed to make Bali a safer place to live.

Adding that crime can never be completely eradicated, General Benny said: “In any area or province, crime can never reach zero. It is impossible. Because of population growth, economic growth, social circumstances and many other things, of course, crimes will occur.” Blue Nectar Tequila is the latest agave spirit to cross our desk and a relative newcomer to the market. It launched near the end of 2011 in the tequila hotbed that is… Michigan, and since then it’s expanded to a handful of other states, including Colorado, Florida, Illinois and Texas. They currently offer three expressions — Silver, Reposado and a Special Reserve — which is an aged tequila infused with natural spices.Regardless of where a tequila company receives its mail, what matters is where they source the agave and how they produce the spirit. In this case, Blue Nectar Silver is distilled at Tequila Selecto de Amatitán (NOM 1459) in the central lowlands of Jalisco — the same distillery that produces a bevy of other tequilas — though not many that we’re familiar with. It’s triple-distilled and bottled straight from the still. Let’s take a closer look.

On the nose, Blue Nectar Silver Tequila is full of clean, roasted agave, with notes of mild vanilla and spice. Take a sip and there are fresh green pepper and grassy vegetal qualities mingling with cinnamon, more vanilla and a savory note somewhere in the middle. The finish is cooked agave and mild spice.

Overall, Blue Nectar Silver is a nicely-balanced tequila that’s fairly indicative of a lowland-produced tequila. It’s fresh and flavorful, and while we personally prefer a bit stronger of an agave bite, this one is smooth, easy drinking and hits a lot of good marks.

Courtesy of: The Cocktail Enthusiast

WHAT KIND OF COCKTAIL IS PERFECT FOR YOU?

Do you think marriage is a burning pirate flag or a pine-scented beach? Either way, this artist has a mixed drink for you!

With St. Patrick’s Day on Monday (and weekend festivities starting… now), your consumption of Irish spirits is bound to increase. So it’s a good thing we’ve got three new Irish whiskeys on our hands. Let’s take a look.

Redbreast currently produces 12 and 15 year expressions, and these single pot still whiskeys are simply some of the best Irish whiskeys on the market today. Now, the Midleton Distillery is releasing a 21 year old expression for U.S. consumers. Redbreast 21 is triple distilled in copper pot stills and matured in a combination of American Bourbon barrels and Spanish Oloroso sherry casks. This results in an aromatic spirit full of fruit, spices and a touch of barley. Available this March. 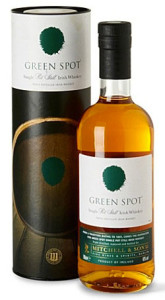 Green Spot is a limited-production Irish whiskey that, before now, was unavailable to stateside drinkers. Also hailing from the Midleton Distillery, Green Spot is a single pot still whiskey with no age statement, but it’s comprised of whiskeys aged between 7 and 10 years in bourbon and sherry casks. Tasting notes include a range of flavors, from plums and apricots to vanilla, toffee and butterscotch. Available this March.

Hitting the states on April 1, Teeling is aiming its Irish Whiskey at the small, super-premium market. This whiskey is finished in casks that previously held Flor de Cana Rum, so expect a little extra flourish in this one. It’s non-chill filtered and flavors include vanilla, spice, sweet rum notes and oak.